Get our best deals & tips delivered straight to your inbox!

FactoryDirectTrains.com is now FactoryDirectHobbies.com! | COVID-19 UPDATE: We are still shipping!

Roll over image to zoom in 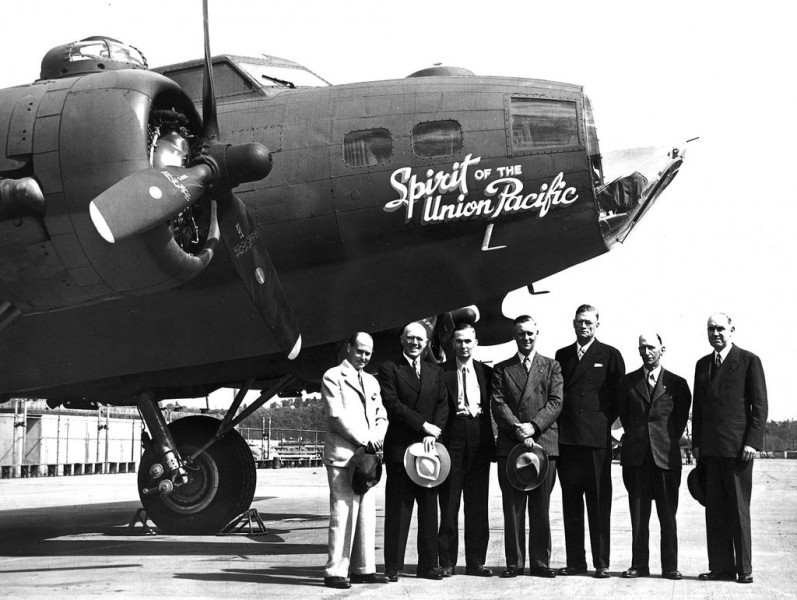 A Boeing B-17 was christened the Spirit of the Union Pacific in 1943,
recognizing employees who funded it through war bond contributions. The Spirit
of the Union Pacific was assigned to the 571st Bomber Squadron and shot down on
its fifth mission during a raid on enemy installations in MÃ¼nster, Germany.

Union Pacifics Locomotive No. 1943, The Spirit, is the 16th commemorative
locomotive introduced in the 155-year-old companys history. The Spirit honors
the United States armed forces and the men and women filling their ranks.
Created in collaboration with Union Pacific veterans, the locomotive illustrates
the railroads connection to the thousands of veterans who helped build America
through the centuries.

Every detail in The Spirits trade dress incorporates a piece of each U.S. armed
forces branch.

The Spirits front is symbolic of Air Force Silver, and the blue stripe is a
reflection of the former Strategic Air Commands nose sash. The lettering
inside the sash is the original hand-drawn font used on the B-17. It is followed
by the Coast Guards Racing Stripe and the Navys Battleship Gray, which
frames Union Pacifics traditional American flag. The military camouflageis a
nod to the Army and Marines.

As the train passes by, the final message on the tail is dedicated to U.S.
prisoners of war and those missing in action, featuring the POW/MIA symbol and
its motto, You Are Not Forgotten.

In order to meet stricter diesel locomotive emissions standards imposed by EPA
Tier II regulations, EMD modified the SD70MAC to create the SD70ACe and SD70M-2.
Each model is powered by a 16-cylinder, 4300-horsepower diesel engine. On the
SD70M-2, the prime mover drives an alternator and produces AC current that is
rectified to DC current, which powers the traction motors. On the SD70ACe, the
DC current is then "chopped" back into AC to power the traction motors.

Much of the external design is based on the SD90 series locomotives. Similar
features include the full height nose door and rectangular windshields, the
large flared radiators with two fans, and the positioning of the dynamic brake
equipment at the rear of the long hood. In addition, the inverters were moved
from inside the long hood to a box on the walkway behind the firemans side of
the cab.

Factory Direct Hobbies has a 30-day return policy, which means you have 30 days after receiving your item to request a return.

To be eligible for a return, your item must be in the same condition that you received it and in its original packaging. You’ll also need the receipt or proof of purchase.

To start a return, you can contact us at ask@factorydirecthobbies.com. If your return is accepted, we'll send you instructions on how and where to send your package. You will be responsible for return shipping, unless Factory Direct Hobbies made an error in the fulfillment of your order. Items sent back to us without first requesting a return will not be accepted.

You can always contact us for any return question at ask@factorydirecthobbies.com.

Damages and issues
Please inspect your order upon reception and contact us immediately if the item is defective, damaged or if you receive the wrong item, so that we can evaluate the issue and make it right.


Exchanges
The fastest way to ensure you get what you want is to return the item you have, and once the return is accepted, make a separate purchase for the new item.


Refunds
We will notify you once we’ve received and inspected your return, and let you know if the refund was approved or not. If approved, you’ll be automatically refunded on your original payment method. In certain instances, store credit may be provided instead of a refund. Please remember it can take some time for your bank or credit card company to process and post the refund too.

We accept a variety of easy to use payment options. From AmazonPay, Apply Pay, to conventional credit cards, we make it easy to complete your purchase.

Save more on every purchase with our FREE cash back rewards program which gives you 5% back in store credit (some exclusions apply).

Have questions? Let our friendly, knowledgeable staff help you decide on your order.

We want you to be happy with your purchase. If you're not, return it within 30 days for a full refund (minus shipping).

Sign up to unlock exciting perks, this is your access pass to exclusive rewards. Plus, we'll kick off your membership with $10 as a thank you.

Earn rewards every time you shop